A year in review of an electric home

Let’s start with the acknowledgment that I am in a very privileged position to be able to do this to a home I own. I do believe that my home will be commonplace in the coming decade, clean, fossil fuel-free, and efficient. I just got here earlier as I had the means and passion to be an early adopter.

I electrified my home about 18 months ago but have only now clocked over 12 months of an electric home with rooftop solar.

Being the nerd I am I have insights and data about my energy usage patterns pre-electrification and post. With the addition of solar, I have even more granular information thanks to the little hardware I have installed in my circuit board that tracks my energy circuits and solar production. I talk about how I use that data when I built my solar dashboard fridge magnet.

You may not see a 10x gain as there are a few caveats to my situation. The gas hydronic system that came with my house was undersized and badly installed e.g. the pipes were not insulated. In 2020 I also did not have my retrofitted insulation, shakes fist at lockdowns. In 2021 I had my roof, floor, and walls fitted with insulation so my thermal envelope performance was a lot better.

The house also had ducted in-floor gas heating which didn’t work but I did retrofit my new electric heat pump to reuse the existing floor vents, heating from the floor with the return vent up at 8ft on the wall means much more efficient heating (heat rises) compared to the normal install for heat pumps where the outlets usually live in the roof I just had very good clearance under my house to make this possible.

I installed solar in mid-April 2021. I had a 20kW system installed which is extremely large compared to the average in Australia for 2021, 8.06kW to be exact, I installed this very large system as I wanted to size it for the winter load and the future electrification of our cars. 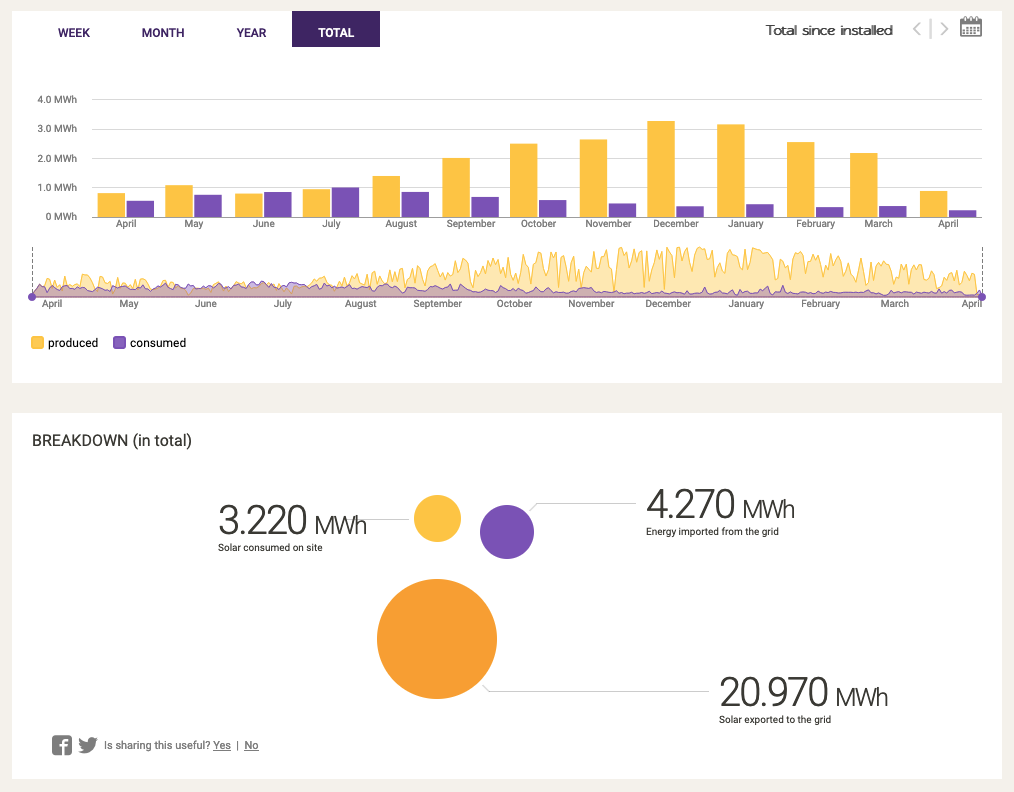 Only in June and July (southern hemisphere winter) did I import slightly more energy than I produced. Overall I exported just shy of 5x my imports!

In Australia, rooftop solar is booming and right now you still get credit when you feed energy back into the grid, that number depends on your system size and the retailer. As of writing it is currently 6.7c AUD per kWh but will drop to 5.2c as of July 2022. Due to the sheer number of rooftop solar being installed in Australia, 14.7GW as of June 2021, that feed-in mechanism is creating issues for the grid and so every 9 - 12 months the feed-in value is dropping. Most likely it’ll be 0 by 2025.

The future for my system is utilising much more of my solar produced at home which will increase when I take delivery of our imported second-hand Nissan Leaf next month. I hope to charge it 99% of the time from my solar.

With my leaf, which has a 30kW battery, I’ll be exploring whether I can use it as a home battery too. The Wallbox Quasar home charger has finally gotten approval in Australia this connects to the Leafs' CHAdeMO port which from day 1 has had support for bidirectional charging (great foresight Nissan).

Some might say I’ll degrade my already degrading battery at a much faster rate but the Leaf has been around for over a decade and has a very enthusiastic community which in tow has spun up some great companies. The one I’m eyeing off is EV Enhanced over in NZ they recently announced their 16 blade aftermarket batteries for the leaf, the first one being a 40kW pack that is highly optimised for the home battery future.

The electric home is exciting and the shifting dynamics of the grid from a centralised generation system to a highly distributed one is going to be very interesting as it plays out.